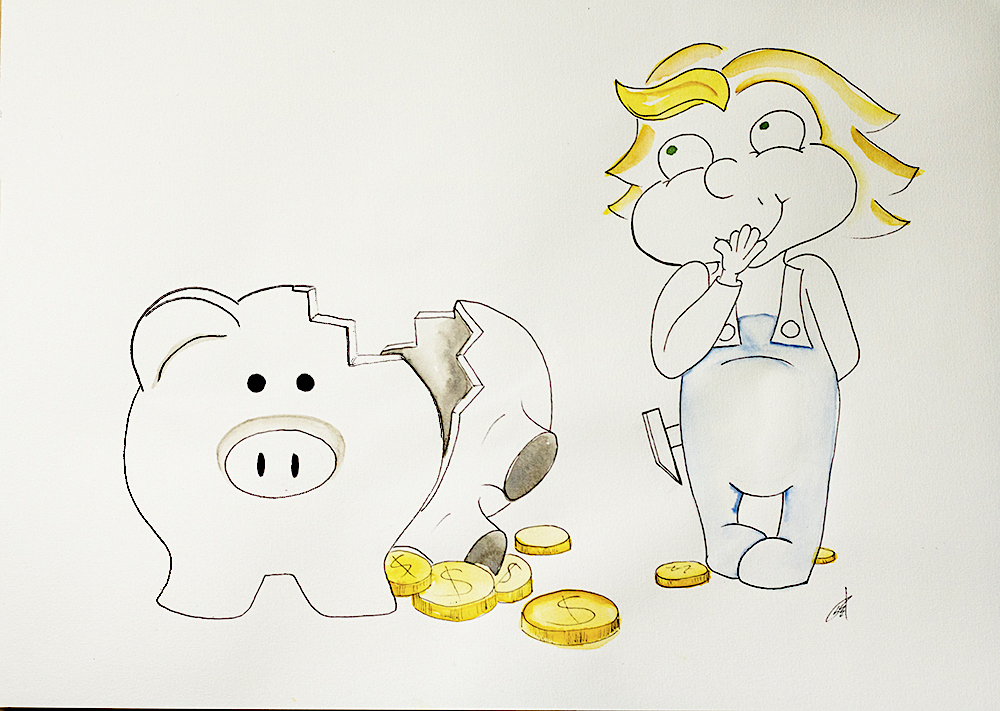 Mischief – Illustration Friday time, only the fourth submission since I played hooky last week. I am telling myself that it is OK, since I had a bit of a cold, and a lot of other things to attend to. But really… Three weeks… I will do better from now on I promise…

Anyway, back to the mischief.

Thanks to J.K Rowling and Harry Potter, I automatically hear “Mischief managed” and think of the Maraudor’s Map whenever I hear the word mischief, but drawing that would be to easy and predictive. Well luckily I have probably done my fair share of mischiefs as a child, so I should have some memories to draw upon for inspiration, in case my brother reads this (and didn’t already know) I apologize in advance.

As you probably all know, sometimes we find ourselves in a situation where there is something we desire, but for some reason or other cannot get, maybe because we can’t quite afford it, as a kid this something was quite often candy. In such a situation there are often a few different options that come to mind, not all equally viable. If I needed money for candy, I could of course ask my mother to give me the money (knowing that the answer would be no, both because she probably didn’t think it was good for me to eat to much candy, and because she didn’t have that much money to begin with, so she probably had better and more important things to spend them on), I could also try to somehow earn the money, babysitting, dog walking, cleaning, and so on, which I did, but that took time, so not really a here and now solution, I could also find someone and ask them if I could borrow some money. Anyway, at one point I must have decided that I could also try to borrow some money from my brothers piggy bank, I remember having done this once, and getting some money out, but I don’t remember how much, and I don’t remember if I did it more than once, in all honesty I don’t think I did.
When we were little, my brother and I both had a small copper piggy bank, standing on the window sill in our mothers house. They were actually very cleverly designed, with two metal wires block the money slid on the inside, they would slide apart when you put the money in, then back together to prevent you from being able to shake the money back out again. His had a small blue star on top, mine had a small red star. I remember sitting with two hairpins and finding a technique to get the two, cleverly designed, safety wires apart while turning the piggy bank upside down, gently shaking it to get the money out. To the best of my recollection, this is the only time I have utilised this particular skill set successfully, (when I emphasize “successfully”, it is because just a few weeks ago I assisted my neighbour, who had locked himself out of his apartment, in trying to brake back in using a couple of old hairpins and a paperclip. We gave up and called the locksmith). Anyway, does this make me a piggy-bank-robber?